Filming in the lab at Natl. University Ireland Galway (NUIG)

‌‌‌‌‌August 2019 -  Una Fitzgerald and her lab members were taking part in  the Science Foundation Ireland Discover project 'Strength in Science'. The project is developing resources for teachers to teach the scientific benefits of exercise on the brain. Una, Enrico and Jill were filmed in the lab while they were providing insights into their daily work as scientists, battling with diseases like multiple sclerosis and Parkinson's disease. 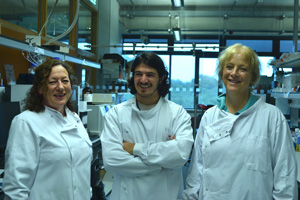 ‌‌‌‌‌July 2018 -  Congratulations to Ana Lúcia Rebelo who was awarded the Tokyo Chemical Industry Prize for Best Flash Communication at the 29th International Carbohydrate Symposium 2018 (ICS 2018), held in Lisbon. Ana Lúcia’s PhD focuses on the development of glycan-functionalised collagen gels as vehicles for cell delivery for the treatment of Parkinson’s Disease. The ICS is the biggest conference worldwide focused on carbohydrates chemistry and biology and is held every two years. It covers different topics within the glycosciences, such as vaccines, gut microbiota, glycoinformatics, glycosylation and disease, carbohydrates and cosmetics, polyssacharide biotechnology and glycomaterials. With over 300 posters being presented, only 28 were selected for flash communication and 3 prizes were awarded to these by different companies. Professor Malin Parmar and her research team at the Biomedical Centre in Lund have developed an entirely new method to get stem cells to turn into dopamine-producing nerve cells that can be transplanted into the brains of Parkinson’s sufferers whose levels of dopamine are too low.  Novo Nordisk are currently initiating a collaboration with Malin Parmar in partnership with the Stockholm-based biotech company Biolamina, with the aim of developing a new stem cell based therapy for Parkinson’s disease.
Novo Nordisk is now expanding its investment in stem cell-based therapies to include other serious, chronic diseases. One of these projects is based on the research conducted by Malin Parmar’s team at Lund University. Read more...

‌‌‌‌‌December 2017 -  Francesco Gubinelli (CEA) has been awarded for the best oral presentation given by PhD student at the 27th annual meeting of the Network for European CNS Transplantation & Restoration (Nectar) in Dublin.

November 2017 -  Malin Parmar (Lund University) is one of the 329 top researchers who have been awarded by the European Research Council (ERC) for the Consolidator Grants . Malin’s project (Patient-specific treatment for Parkinson's disease using reprogrammed skin cells - TREAT-PD) will be funded with two million Euros over the next five years. Congratulations!   More…

November 2017 - Dr Eilis Dowd and her team have publlished their work in regenerative medicine approaches to Parkinson’s disease. Read more at thejournal.ie and Irishcentral.com 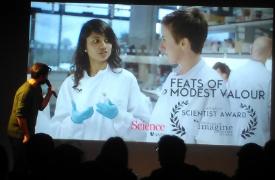 ‌October 2017 - Th‌e Irish Parkinson’s disease documentary, Feats of Modest Valour, a Science on Screen documentary by CÚRAM, the Centre for Research in Medical Devices at NUI Galway, won the prestigious Scientist Award at the Imagine Science Film Festival in New York.
The film portrays three individuals live clockwork existences, dictated by a strict regime of medication to manage the physical reality of living with Parkinson’s disease. Interwoven with their stories, we see researchers from CÚRAM, and BrainMatTrain, e.g. Dr Eilís Dowd, who are developing a novel therapeutic approach which they hope will revolutionise treatment of the condition.
The film has already been screened at numerous community events and at film festivals both in Ireland and across Europe.

August 2017 - Orbsen Therapeutics received approval from European Regulators of its first-in-man clinical trial of ORBCEL-M™, their novel highly purified stromal cell therapy for diabetic kidney disease.
Chief Scientific Officer at Orbsen Therapeutics, Dr Steve Elliman, said: “Approval of this first-in-man trial of ORBCEL-M™ is the result of a collaborative effort comprising Orbsen and nine clinical and cell manufacturing teams across Europe and was made possible by the EU Horizon 2020 program.” More...

June 2016 - New treatments for Parkinson’s disease, back pain, diabetes-related wounds, and a range of neurodegenerative disorders, metabolic syndromes and inflammatory diseases are being developed at the Science Foundation Ireland-funded CÚRAM, SFI Centre for Research in Medical Devices in Galway.
The centre has received €49 million in funding from SFI and a number of industry partners to support its goal of developing affordable, innovative and transformative device based solutions to treat chronic illness and improve the lives of patients around the world. More...

August 2015 - The Centre for Research in Medical Devices at NUI Galway CÚRAM leads Novel Treatment for Parkinson’s Disease. CÚRAM has secured €4 million Euros to lead a consortium of researchers on a new research project that will investigate novel treatments for Parkinson’s disease. More...